The idea for this mini dance/video was born out of  Alain Honorez's   desire to combine his two passions - dance and film - into a single artistic form. I myself would be responsible for the choreography and had already found a story line.
Apart from that, plans were vague; enter Jean-Paul Delme, a creative visionary with a wealth of ideas and organisational ability. He called in the talents of photographer Kris Lathouwers, artist and musician Charlotte De Cock, found the ideal location ( the Issey Miyake showroom in Antwerp’s Eiermarkt) and we were away!
I set to work with two beautiful and photogenic dancers, Laurie McSherry-Gray and Anastasia Paschali; together with the gorgeous Miyake clothing, Charlotte’s atmospheric soundscape and under Alain’s sound artistic guidance, this project gradually took shape. Although JP is sadly no longer with us, I am certain he would have been, just as all of us were, truly delighted with the result. 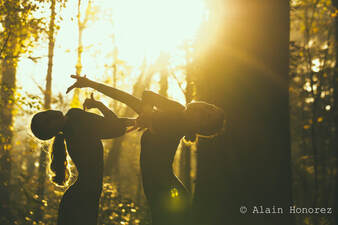 ​This choreography grew out of the need for a contemporary audition solo for JUNIOR BALLET ANTWERP’S  young women, one which would showcase their various qualities and particular talents. But it was the Covid crisis which, strangely enough, helped me push boundaries. Out of the desperate need to perform, we took to the open air and in particular to one of Flanders’ most beautiful forests. There the magical elements of form and light helped me -and four of my dancers -transform the movements into creating very site-specific images. As I realised afterwards, it was all very ‘ of the moment’. Dancing on the rough, leaf -strewed floor was no easy task but it was this totally natural environment which added to the enchantment. The expressions of wonder and curiosity on the dancers’ faces, the way their hands and arms echoed the forms of the trees, were images which developed spontaneously , even unconsciously, because of the pastoral quality of the background. Wolf Hoeyberghs’ specially -composed music was transposed later and we tailored it to suit the dance dynamics; all this together with Alain Honorez’s inspiring filming came together to create a scene of hope and rebirth.The title of the piece -  AWAKENING - describes the artistic flowering we have striven for in each of our young dancers, as well as the inevitable return of light after a dark and difficult period. 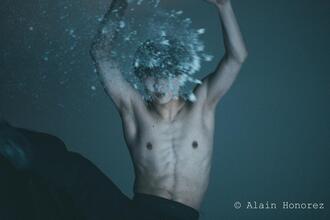 This duet is based on my original work for 13 young men, a commission for Royal Ballet School of Antwerp.
YU means COURAGE and this is one of the elements I wished to portray- working entirely with young men was a chance to break out and experiment with  new forms and dynamics. I went for contrast- bold jumps, confrontational positions as opposed to the smoothness and control of technique, all of which our young men have acquired in their training with us. The music - from the hand of dancer/musician Wolf Hoeyberghs has a subtle Asian flavour and the monochromatic filming ( Alain Honorez again) costumes and lighting, I feel, do full justice to the strength of the dancing. Here we chose to use Rin Isomura and Akihito  Shimogata, but YU2 is a work which takes on another dynamic when performed by a larger contingent of men.