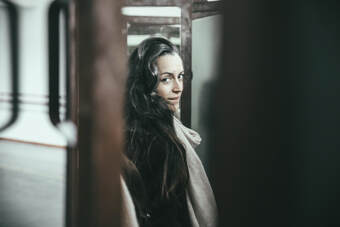 Born in Spain in 1979, Altea Nuñez started dancing and completed her formative training at the well-known VICTOR ULLATE Ballet School based in Madrid. On graduating with a diploma of distinction from the Conservatoire of the Hague, she joined the Ullate Company, where she danced for three years.

​On being promoted to soloist and then first soloist in 2006 , she danced Aurora and the role of Odette/Odile in Marcia Haydée’s acclaimed productions of The Sleeping Beauty and Swan Lake. During this period, she danced principal roles in ballets by George Balanchine, Jiri Kylian (Forgotten Land), William Forsythe (Artifact, Impressing the Czar, New Sleep, Herman Shmerman) and Wayne McGregor (Infra).


In  2014,  Altea retired from the company to concentrate on CHOREOGRAPHY.
Her choreographic career was launched with the immediate success of her first work 'Contigo' created for Ballet Flander's choreographic platform 'Choreolab'. The following year saw another success with 'Claroscuro' created for the same choreographic platform. Nuñez saw this as a work in progress as did the new artistic director of​ Ballet Flanders Sidi Larbi Cherkaoui. In consequence he invited Nuñez to develop the concept, resulting in a full-length 'Claroscuro' which established her as a rising talent and 'one to watch'.

In 2015 Altea created work for Professional Dance Conservatoire of Barcelona the Royal Ballet School of Antwerp and imparted a choreographic workshop at the Upper Conservatoire of Dance in Madrid.
She has been asked to create several 'duet works' which has been performed at International Gala Performances in Argentina, Spain, France, Italy, Slovenia & Cyprus.

She was invited by Marcia Haydèe, artistic director of Ballet de Santiago de Chile to re-stage her piece 'Claroscuro' for the '3rd Choreographers  Festival' 2016.

In 2017 she became teacher at the Royal Conservatoire of Antwerp, where she taught ballet classes for three years.

In 2018  Altea has created and re-staged work for Compañìa Nacional de Danza Spain, Palucca University of Dance Dresden,  Danzarte 21  (Spain)  and for the Royal  Ballet School of Antwerp.

​In 2020  her last creation  '4.2 Summer' is performed as part of the program  SEASONS 4.0  at the very first premiere  of Junior Ballet Antwerp at the  Antwerp Opera House.